Spanning two countries, the Salish Sea is a diverse ecosystem that supports thousands of plants and animals. Learn more about the cultural and natural history of this area and why its worth protecting. 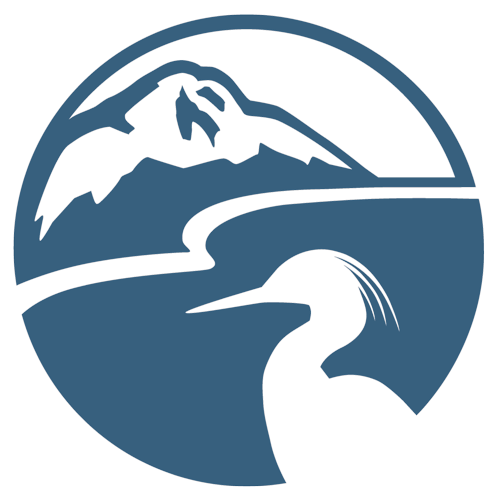 Harbor WildWatch acknowledges that our programs take place on the traditional homelands of the Puyallup Tribe. The Puyallup people have lived on and stewarded these lands since the beginning of time, and continue to do so today. We recognize that this land acknowledgement is one small step toward true allyship and we commit to uplifting the voices, experiences, and histories of the Indigenous people of this land through our work.

Learn more about the Puyallup Tribe

We gratefully honor and acknowledge that we rest on the traditional lands of the Puyallup People.

The Puyallup people have lived on this land since time immemorial and are still here today. They live, work, raise their children, take care of their community, practice their traditional ways, and speak the Twulshootseed language – just as their ancestors did.

The Salish Sea is one of the world’s largest and biologically rich inland seas that encompasses three bodies of water across two countries. The Puget Sound in the United States, the Strait of Georgia in Canada, and the Strait of Juan de Fuca that borders the two counties. The sea spans from Olympia, Washington in the south to the Campbell River, British Columbia in the north, and west to Neah Bay and includes the large cities of Seattle and Vancouver.

The Salish Sea takes its name from the Salish Language, spoken
by many Tribal Nations whose territory extended throughout the region. The rich
biodiversity and abundance of natural resources of the sea and surrounding land
has sustained and supported these people since time immemorial.  Those same resources attracted settlers to the Pacific Northwest which resulted in the land of the Coast Salish People being stolen from them.

Unfortunately, the Salish Sea is in danger due to years of pollution, over fishing, and development. We hope our work inspires you to be a good steward for the environment by taking steps to reduce your impact on this incredible natural resource. 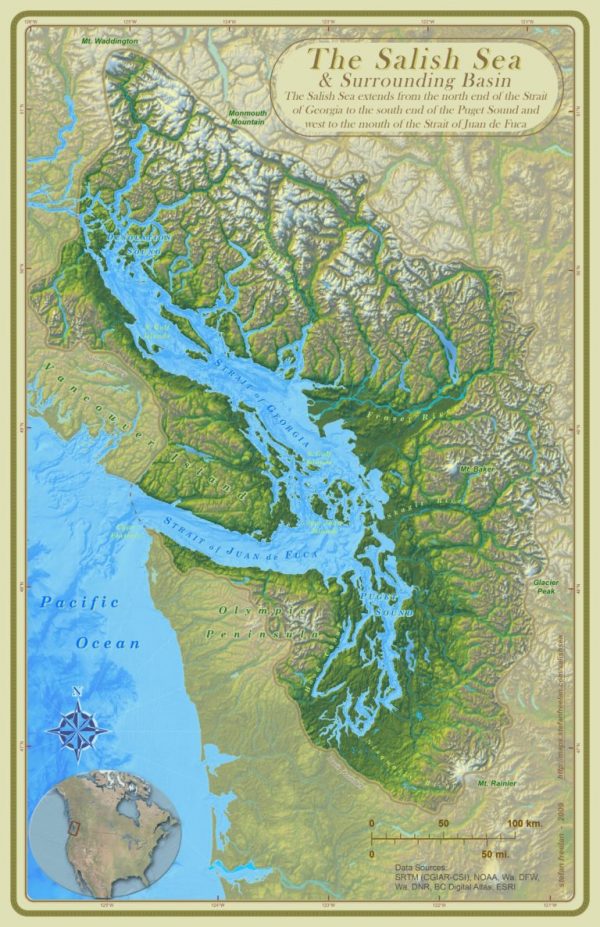 Water Bodies of the Salish Sea

Puget Sound is an estuary in the Pacific Northwest, an inlet of the Pacific Ocean, and part of the Salish Sea. It is located along the northwestern coast of Washington State in the United States, just south of the Georgia Basin in British Columbia.

The Strait of Juan de Fuca is a body of water about 96 miles long that is the Salish Sea’s outlet to the Pacific Ocean. The international boundary between Canada and the United States runs down the center of the Strait.

The Puget Sound is the second-largest estuary in the country. It was formed around 15,000 years ago by a massive glacier moving south across the area. This glacier was over 3,412 feet thick – that’s taller than five Space Needles! As it moved south, it shaped the land like a giant bulldozer, carving out the basins that make up The Puget Sound as we know it.

All of the rivers and streams in the Seattle area flow into Puget Sound – that’s over 10,000 streams and rivers, or 41,000 cubic feet of water per second! This huge influx of freshwater is what creates the estuarine habitat that’s so valuable for wildlife. In addition to the 3,000 species of marine invertebrates, there are over 100 species of birds, 29 species of marine mammals, and 7 species of salmon that call the Sound home. This includes everything from killer whales, seals, and bald eagles to sea urchins, sea stars, and jellyfish.

Want to learn how you can protect Puget Sound?

The Key Peninsula-Gig Harbor-Islands (KGI) Watershed is located in western Washington State, just west of the city of Tacoma and drains into Puget Sound. The KGI Watershed is actually a grouping of several small watersheds of similar size, geology, hydrology, and vegetation. The Watershed covers an area of approximately 101,000 acres and includes 179 miles of saltwater shoreline. Over 70,000 people live in the area that includes Gig Harbor, Key Peninsula, Anderson Island, Fox Island, Herron Island, Ketron Island, and McNeil Island.

Since the mid-1980’s a number of plans an activities have been developed to address problems related to water within the KGI Watershed. The majority of these efforts have been focused on improving water quality, particularly in shellfish growing areas.

In 1996, the KGI Watershed Management Committee was formed to create the KGI Watershed Action Plan (KGI Plan). The KGI Plan was prepared in accordance with the “Nonpoint Rule” (WAC 400-12) and focused on water quality problems from diffuse sources such as stormwater, agriculture, forestry, boats, and septic systems. The KGI Plan was completed in 1999 and adopted by Pierce County in 2000, Kitsap County in 2001, and the City of Gig Harbor in 2002.

After adoption, the KGI Watershed Council was formed to track and facilitate implementation of the KGI Plan. Since 2002, the KGI Council has continued to provide educational and networking opportunities.